Rehoboth based ceramic artist John Cooley has demonstrated his lifelong fascination with nature and wildlife by drawing and cartooning animals for as long as he can remember. After a ten year career with the Friends of the National Zoo and obtaining a Bachelor of Fine Arts from the University of Maryland he moved to Rehoboth Beach in 1999 to complete his Masters in Art Education at Salisbury University. He began his career as an art educator for Worcester County Public Schools in August of 2000.

In 2007, influenced by the joyful, spontaneous art of his students, he joined the Rehoboth Art League to take nighttime classes in ceramics. It was here that he began to explore various hand building and sculptural techniques that allowed him to create functional and decorative pieces that expressed a playful mood. After receiving the Best Sculpture award at the 2009 RAL Fine Art Exhibition, John decided to turn this new pastime into part time income by participating in several local juried art festivals. He especially enjoys watching the reactions of the public as they enter his booth and the camaraderie with other artists. In 2016 he took early retirement from teaching and began selling his work full time. Today he participates in twenty shows a year from the Heart of Lancaster to the Neptune Festival in Virginia Beach. 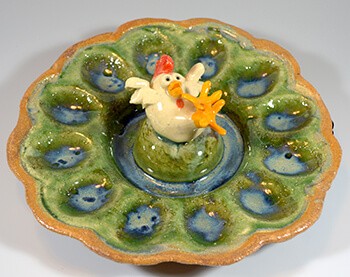